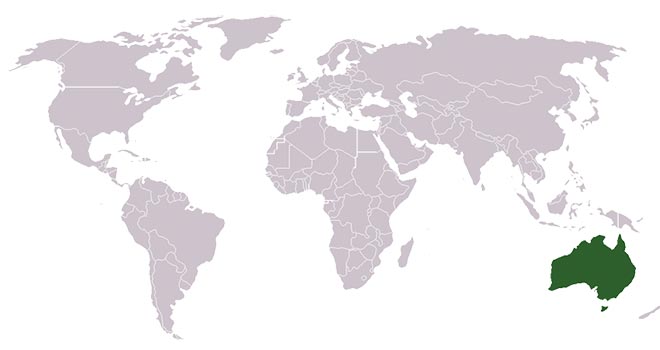 In the wild, Bearded Dragons are originally from Australia, however, there are different species in different parts of the country.

There are a total of 9 types of Bearded Dragon, they all originate from Australia and are all part of the same family. The Pogona Vittikins is a crossbreed that naturally occurs between the Vitticeps and Lawsons/ Brevis Bearded Dragons.

There were rumors that most dragons in the US were bred from stock in Germany (Illegally exported from Australia) back in the 1980s. The Bearded Dragon has since gone on to be one of the staples of the exotic pet trade and is now commonly found in most pet stores – however, it’s not always legal to sell Bearded Dragons, different states, countries, provinces etc… have different rules and licenses for different species.

Where are Bearded Dragons Found?

Bearded Dragons are found in the wild in a variety of habitats that are difficult to reproduce in the confines of a vivarium. They are semi-arboreal meaning they like to climb, they live in scrubland, desert, rocky areas, coasts, woodlands and this depends upon the specific location.

Different species will have slight differences in tolerance of environmental factors such as UVB, humidity, and temperature but are all within a common range to the Pogona family.

On the below map the main 8 species locations are marked and showing the overlap between them.

The data on this map was compiled with the aid of the following sources:

Outside of Australia you’ll find Pogona Vitticeps (Central/Inland Bearded Dragon) and Pogona Henry Lawsoni (Rankins Bearded Dragon) are common in the pet trade, very rarely Pogona Barbata will turn up in the trade in the US from specialized breeders. Almost all color morphs and variations are likely to be Pogona vitticeps. Typically you don’t need a license to keep them as a hobbyist.

Within Australia, you’re able to keep most species of Bearded Dragon but will need to be a licensed keeper and this depends upon the species and territory that you’re in, for example, in NSW you can keep:

With a class 1 license, but you need a class 2 license to keep:

Whether you live in or outside of Australia, always check that you’re buying a legally captive-bred Bearded Dragon. If you live outside of Australia and you see species other than a Vitticeps or Lawsons/ Rankins then question the legality of it and where it’s come from and its lineage.