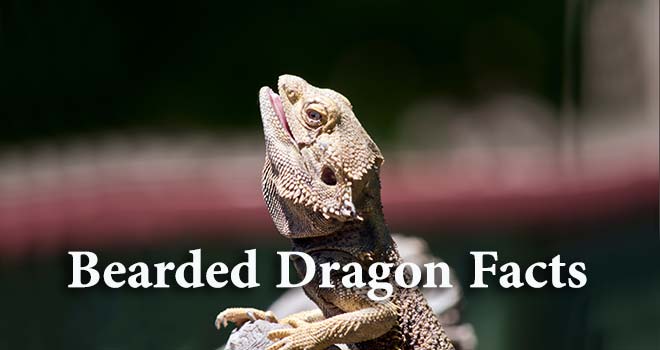 Scientifically known as Pogona vitticeps, bearded dragons are medium-sized lizards that are generally 12 – 24 inches in length from head to tail. Bearded dragons are native to Australia, found in the eastern and central parts of the country. They usually live in deserts, woodlands, savannahs, arid and rocky areas, dry forests, and scrublands.

Bearded dragons were introduced to the United States during the 1990s. It can be found almost in all pet shops in America ever since, as one of the most popular reptiles. The most popular bearded dragon in the US is called the Inland or Central Bearded Dragon.

Despite the pet trade, the number of bearded dragons in the wild is still stable. They are not on the list of endangered species.

Where do Bearded Dragons Come From?

Bearded Dragons only come from Australia. They live in hot arid climates, such as semi-desert areas and dry woodland.

While there is little water in their habitat they do actually enjoy swimming/ wading in shallow water nearly as much as they enjoy pooing in it! Here’s more information on where Bearded Dragons come from.

They are scientifically known as Pogona which is a subspecies of the Agaminae family of lizards which are then part of the Agamidae species. Read more details about the features of Bearded Dragons.

They share many physiological features found in other Agamid lizards as well as things such as habitat, diet, behavior. Bearded Dragons have very strong legs and can move at an astonishing rate if they need to, generally though they can only sustain short bursts.

They are called Bearded Dragons because of the beard-like pouch under the mouth that they can inflate and the dark colors that it will turn. There are 9 species of Pogona / Bearded Dragon although some could be classed as the same since only the location of habitat varies.

In captivity, Pogona Vitticeps has been bred into a multitude of different colors and markings. They have excellent eyesight and can see prey over a fair distance. It has been known for them to run on their hind legs, although this is claimed to be seen in the wild – I have yet to see it.

There’s more in-depth info on the behavior of Bearded Dragons but below are the basics. Pogona are diurnal, meaning that these lizards are active during the daytime. They display a variety of communication methods between themselves such as arm waving, head bobbing, color changes, and inflating their bodies into a disc shape to face off against each other.

In groups, more dominant dragons will often climb and lie on top of another dragon in order to claim a basking spot. They are very territorial and can be aggressive to other dragons, especially males. They will bite and nip at the toes and tails of other dragons and even attempt to steal food from another Beardies mouth.

Most adult dragons are docile and friendly with a good temperament, they can be quite outgoing and adventurous at times. They display some basic signs of intelligence, I have one dragon that recognizes the sound of a bag of locusts and another that know where the food is kept and will always attempt to break-in.

Below are the summary facts, but there’s a lot more to read up on in this collection of articles on Bearded Dragon diet, food & nutrition. Pogona/ Agamids are generally omnivorous eating anything from vegetation and insects to small mammals such as mice.

They can go for weeks without eating although generally are very greedy eaters. I have yet to find anything that a dragon won’t eat, it’s more a case of preventing them from things that they shouldn’t eat.

They need a supply of calcium and vitamin D3, using UVB radiation from the sunlight to help produce/metabolize it.

The average life span is around 5-8 years. Pogona Vitticeps for example can live for up to 10 years and grow to up to 60cm / 24 inches in captivity. Life span is significantly reduced in poor habitats or constant breeding. You can read more about the life span of Bearded Dragons. by clicking that link.

Courting behavior can last for weeks. In captivity they are prolific at breeding, with a high success rate for the young, you can quickly end up with 50 baby dragons with no effort.

They can lay up to 150 eggs over several clutches. The female can store sperm to use when she has eggs to fertilize them. You can find more out more about how to breed bearded dragons on this site.

Similar to mammals they will have extended periods of rest where they shut down/ sleep for a few months, this is known as bearded dragon brumation. When brumating they should be left alone and the temperature inside the enclosure should be reduced.

Below is a list of 20 cool bearded dragon facts.