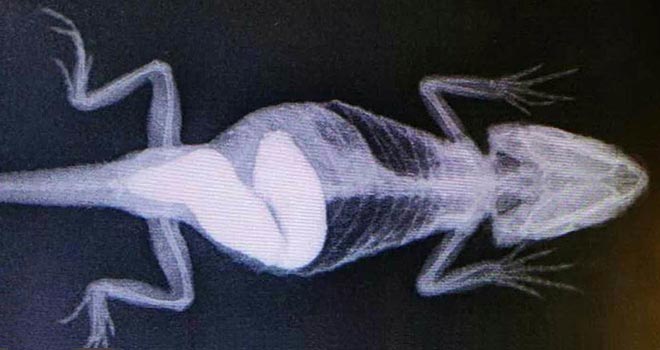 Impaction is a fairly serious topic and health concern, if caught soon enough then you can do something about it.

If you don’t act quickly when the signs of impaction in your bearded dragon then it’ll mean death in severe cases, it’s more prone to happen in young dragons but can just as easily affect adults too.

Providing they’re not in brumation/ hibernation, the symptoms of impaction are a lack of appetite, none or bloody feces, lack of energy, dull/sunken eyes over the course of a few days.

After hatchling stages, these lizards are pretty tough so it may just be a mild case of impaction that passes, and here you may note runny poo (providing you’ve not been overfeeding on the juicy fruit & veg) or a lack of poo for a while.

You can help to ease impaction a bit, by bathing their bellies in warm water and feeling between the ribs and hind legs for a solid poo that’s built up you can help to try and massage this a little.

In more severe cases you can see that the spine will be deformed, this is caused by the blockage building up in the gut and putting pressure against the spine. Also look out for any partial paralysis in the dragon’s hind legs.

This commonly comes down to three things really, substrate, foreign objects, and oversized food. If you feed prey items that are longer than the width of between the dragon’s eyes, this will cause impaction and a build-up/ blockage, which may even lead to paralysis and death.

If like me you let your dragons out from time to time to roam the house and windowsill, make sure there’s nothing that they may be tempted to eat, a few times I have had to remove a long hair that they’ve managed to eat it up along with something else for whatever reason.

The main discussion around impaction normally comes from bearded dragon substrate. These dragons live in arid environments / semi-deserts so some digestion of sand is expected, otherwise, how would they survive? Avoid Calci-sand, as it tends to be expensive and due to its man-made nature is much more likely to bind with other grains. Of course, it depends more on how old the dragon is, if it’s less than 3 months old then you really shouldn’t be keeping it on anything but paper towels. Otherwise play sand, topsoil, etc… is fine.

How to Treat Impaction in Bearded Dragons

This depends on how long the symptoms/ signs of impaction have been present, if the dragon is young (less than a year) and hasn’t eaten in the past few days get them to a vet now. Otherwise, for mild impactions, the best cure is a warm bath – if they do a poo in the bath then look out for solid urate (the white bit) and what will look like small stones as grains and things have clumped together. If you see blood there, take a sample along with your bearded dragon to your vet.

In severe cases, passing the impaction can cause paralysis in the hind legs and deform the spine causing further nerve damage. It can also cause a prolapse – your dragon literally poops his guts out. If these happen then go to a vet straight away, a prolapse can be cured.

Prevention is the best treatment for impaction and this is fairly easy, maintain the correct temperatures in the tank along with a well-balanced diet, don’t feed oversized prey, and minimize the chance of them eating up the substrate/ foreign objects – if you’re that paranoid about it then always hand feed, using a food dish along with plenty of areas off of the substrate will minimize them eating up the dirt as well as the food.

As a side note, I had a young Rankins/Lawsons Bearded Dragon that had been kept from a hatchling on calci-sand, needless to say, it died of impaction – you can’t blame calci-sand, just the fact that it was kept on the sand to start with and probably ingested the substrate due to careless feeding.

In the wild, most prey will be caught off the floor in bushes, trees, etc… so why feed them on the sand in the first place?

If you are worried about impaction, stop reading this and go to the vet, at the very worst you get a nice x-ray that shows if your dragon has healthy bone development so treat it as a checkup.