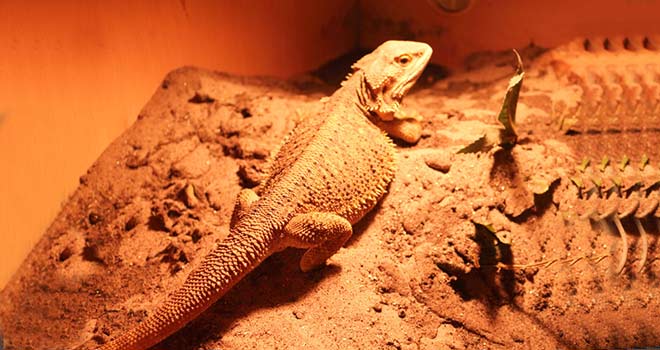 Female Bearded Dragons can lay either infertile or fertile eggs, depending on if they’ve been with a male or not.

To further complicate matters they are also able to store sperm, which means that they can also develop and lay multiple clutches of eggs.

For beardies that have never had a mate, they may develop a clutch of infertile eggs, but this seems to happen more occasionally. Once in five years for my Rankins/ Lawsons and once in three years for my Leatherback. If they have had a mate previously, it seems that they are far more likely to develop and lay infertile clutches, I have one female who now has no mate but has laid eggs 2 – 3 times a year, all infertile.

There are also environmental factors that can stimulate egg development such as seasonal temperature, lighting, and brumation. But the most likely cause will be from mating, if you’ve introduced a mate, it normally takes 5 – 6 weeks to develop and lay the eggs after mating.

In short, it’s likely at some time or other your female Bearded Dragon will develop eggs and go through the stages of pregnancy.

The most obvious signs of pregnancy are:

Rapid Weight Gain
Over 2 weeks after mating, she’ll start looking fatter, when she’s lying down you can see them spread out more than usual. When she’s moving around you’ll see her belly area sagging – more noticeably nearer her hind legs.

More skittish
You put your hand in the tank and she’ll now all of a sudden start to angle her body towards you or run away from you. Generally, she won’t want to be picked up.

Increase in appetite
This should be noticeable, she’ll be voracious and will really throw herself into eating anything remotely edible you put in the tank, it’ll seem like no matter how much you feed, she won’t stop eating.

She’ll be highly alert too and will spend more time basking. When this occurs remember to dust food with calcium powder – eggs need calcium to develop, if there’s none it gets taken from the mother.

Feeling the eggs
To rule out whether your lizard is overweight, after 2 – 3 weeks after breeding you should be able to gently feel a series of bumps around her underbelly near the rear (where my hand is in the picture) – the bumps will be more noticeable nearer her sides. If it’s an infertile clutch you may not be able to feel very many eggs. Remember to do not apply any pressure, be very, very careful.

Restlessness
This normally means they’ll wall surf a bit and be very keen on exploring outside their vivarium/terrarium. It will normally start with you being able to hear them constantly scraping at the wall. You’ll also be able to hear them moving around their viv more frequently, don’t be surprised if they try to escape.
If she doesn’t start digging then try giving her a warm bath.

Constantly digging
She just won’t stop digging and will do this in many different places – though normally this will be around the hot end of the tank. Remember that you want a good depth of substrate with some sort of cover (bark etc…) over the top to allow them to dig a shallow burrow.

I recommend Sand, Soil and Vermiculite, in equal parts, kept moist to retain its shape. After she’s been digging a while she’ll eventually settle on a place to lay the eggs – normally in a warm spot.

After a few weeks of being gravid and just after all the digging starts, her appetite will slow down, she’ll start to avoid food. I still leave vegetation in a bowl every day with a little bit of calcium dusting on it every other day. As long as she’s still digging this lack of appetite is nothing to be worried about.

Remember all that digging and laying eggs takes energy, so she’ll be really hungry afterward, especially after fasting, and will spend more time under the heat lamp to metabolize her food quickly to replace lost energy stores.
For more information click here: bearded dragon eggs

Also please take the time to read up on the symptoms of egg binding in Bearded Dragons – what happens if they’re unable to lay their eggs.