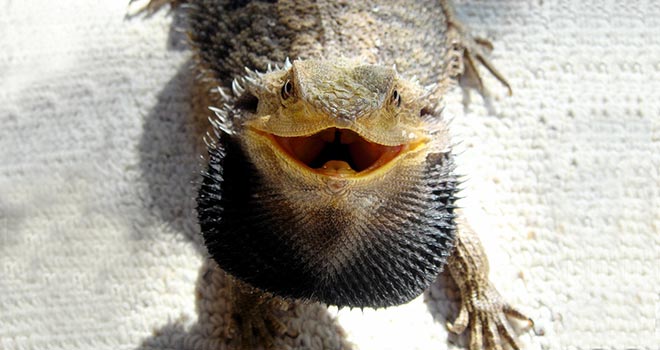 Well, it depends, typically they’re not aggressive and aren’t going to bite you, you’d have to really push them to get them to attack you, so you’d probably deserve it.

Do they bite? The bearded dragon is normally a docile lizard and rarely aggressive towards us humans unless we go out our way to provoke them, most often they’d rather run away. Aggression is normally reserved for hunting food or against other dragons, so you are perfectly safe to handle them.

You may think that they’re going to bite you and they’ll certainly give you all the signals that they intend to do so, such as open their mouth and try to look intimidating, but every time I’ve still been able to pick them up, they just make a bit of fuss.

The only time biting is likely to happen is out of confusement, when they perceive something like food, such as your finger.

This is quite common because they see your hand always feeding them they get to make that association between your hand and food, frequent holding and non-feeding interaction should help. This isn’t limited to this type of lizard, I have a chameleon and a friend’s monitor that do exactly the same thing.

The precursor to the beardies wanting to bite your finger is them almost sticking their tongue out and looking ready to pounce. They’ll hesitate because they’re not quite sure, if you’re holding an insect then there’s no hesitation. Sometimes they don’t quite get it right and they’ll nip your finger in the process, but it’s never a full bite.

I have heard of people being bitten by their beardies on the ear lobe but again this is likely to be down to confusement more than anything else.

If you are bitten, there’s not much pressure in their jaws, the best thing to do is to make sure that your beardie is supported because if you lift your hand in exclamation, remember they’ll still be attached, and then start to wiggle making it worse. Simply remain calm, support them and using a free hand prise the jaws apart.

Remember that their bite is not poisonous, and you’re likely to get a bigger wound from them scratching you. Just be sure to wash afterward as you would after handling them anyway.