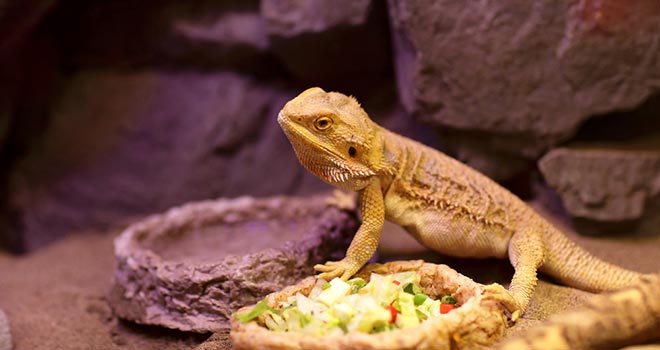 If your baby Bearded Dragon isn’t eating this is more critical than an adult, simply because they won’t have the fat/energy reserves to last out any appetite loss.

There’s a myriad of factors that can cause your Bearded Dragon to stop eating. Everything here focuses on a lack of appetite and what can cause it if your bearded dragon is not eating.

Below is a flow diagram to follow which I’ve compiled to give you a list of things to check, it’s not exhaustive. The best thing you can do is go to the vets if you’re concerned, I can not stress this enough.

At the bottom of the flow chart, there’s a fuller explanation for each symptom point.

1. Have they started shedding?

Bearded dragons shedding their skin will often have a decrease in appetite, look for dullish/ greyer look to their skin, any signs of peeling and if they’re scratching themselves or rubbing themselves along the floor. Shedding is more common in juveniles.

2. Are they sharing with other Beardies?

Bearded dragons sharing with others, dominant behavior from one dragon can mean that the other eats less, or worse won’t eat at all.

3. Is their temperature gradient correct?

Correct temperatures for bearded dragons should be maintained, pogona need to be able to regulate their body temperature by moving between different temperatures. The correct heat also helps them digest their food.

4. Are they awake but spend all their time outside the basking spot?

This is normally a sign that the temperatures are not correct, in order to process their food, being cold-blooded animals they need heat in order to digest.

5. Has the UVB bulb been changed in the last 12 months?

UVB bulbs lose their output between 6 and 12 months depending on the manufacturer, while they still may look like they’re working, they won’t be emitting UVB.

Bearded Dragons need 10% minimum UVB and to be able to bask within 12 inches of the UVB source. They need this amount of UVB to produce vitamin D3 in their skin which in turn metabolises the calcium in the diet. Without UVB and vitamin D3 the calcium isn’t absorbed and can cause an imbalance, manifesting itself later on as Metabolic Bone Disease. The young are at the biggest risk of this.

Not always a big deal in adults but in baby Bearded Dragons and the frequency at which they’re eating you should expect them to be regular in their toilet habits. A warm bath, or just being outside the vivarium can normally trigger them to poo.

8. Any chance that they could’ve eaten some of the substrate?

This is more the case for baby Bearded Dragons, in adults this will be less of a problem. In the young, substrate can build up in their gut and cause a blockage, a bath will help them pass the substrate – keep an eye out for hard urate (the white bit) and in the case of sand substrates, what will look like stones (where the substrate grains have clumped together)

9. Have they been fed insects larger than the recommended size or overfed on insects/ worms?

If they’ve been fed insects that are too big for them, this can cause a blockage. Also if they’re generally overfed, there can be a build up of chitin from the insects exoskeletons, which is indigestible and can cause a blockage. Normally if over fed on worms for example, especially if the dragon has not chewed them properly, you’ll see the worms chitin skin in the poo. This becomes a bigger problem when there’s not much vegetation in the diet. Try giving them a warm bath, the water will hydrate them and most times they’ll poo in the water.

This can be a sign that they have an impaction developing, although if they’re trying to dig constantly, over a year old and probably female then this can also mean that they’re pregnant. Impactions generally will show as a solid gut or in more extreme cases distortion of the spine.

11. Are they trying to sleep in the cooler end of the vivarium and trying to dig?

If this is the case then it’s possible that they’re trying to brumate. However this only happens in adults, so if your baby Beardie is trying to do this, something else is up and is a sign of illness.

12. Any chance they could have eaten any wild insects or poisonous veg?

It’s fairly rare, but if there’s a chance that they could have eaten something dodgy then it can cause poisoning. E.g. insects and plants from outside can be carrying pesticides, parasites etc…

13. Are their eyes not bright and alert? Mouth tissues not pinkish? Have they had rapid weight loss?

These are all common symptoms of a parasite/ virus. Also look for other signs such as coughing, fungal infections & open sores.

14. Have you tried hand-feeding them?

Sometimes a bit of variety helps, try them with some other foods (worms, strawberries etc..). Babies may not be replacing enough energy that it takes to catch their food, so making it easier may be all it takes.

15. Do you frequently use calcium/ multivitamin dusting?

No? Then they could be developing a deficiency, which can cause health problems, notably a lack of appetite and rapid weight loss.

16. Are you using a recommended powder?

Using the correct ratio of vitamins for Bearded Dragons is important although in a balanced diet this generally doesn’t cause too many issues – things to watch out for are powders high in vitamin A, B1, D3

If they haven’t eaten and are not brumating, pregnant, shedding etc… then get them to a vet.