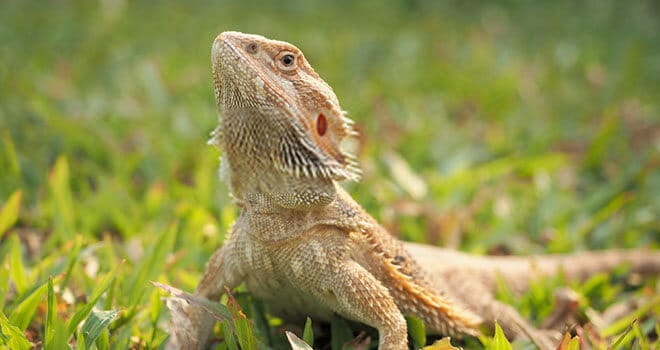 Head bobbing, or the repeated action of rising and lowering a bearded dragon’s head, is a very common behavior that can have multiple meanings, but mostly you can assume that it has something to do with developing a social hierarchy.

Generally speaking, head bobbling is a more common act for males to exhibit (however this behavior is not sex-specific), and is often associated with territorial aggression or dominance during breeding. You may also notice bearding, a puffing and darkening of the throat, or arm-waving.

First, to decide why a dragon may be bobbing its head all that’s needed is for you to glance around. Are there female lizards around? Are there other males present or have you put multiple dragons in the same bearded dragon enclosure (we don’t suggest this)?

Bobbing is mostly about showing off, and how they’ll display this action is really based on how important it is to show territorial aggression or dominance. Larger males will display such forceful head bobbing that they will actually lift their front feet off the ground in a spectacle that looks a lot like stomping. In some cases, you can even hear it.

If there is both a female and male around (or multiple males and females), you can assume that the dragon is bobbing to show his dominance to the female. It is a common display of power during times of breeding and courtship to show that the male is suitable mate. Normally, this type of head bob is accompanied by other behaviors such as waving, pushups, or even bearding, and can be met with a submissive bob from the female.

However, bobbing is not synonymous with only males. It is possible for a lady lizard to also bob at a male, too. Females won’t typically display dominance over other females with head bobs. A lady’s size is normally the deciding factor as to her placement within the hierarchy. Usually, female bobbing will be smaller and slower than males.

Another possibility is when two males may be close by or are introduced into the same area. In an attempt to show territorial supremacy, they will begin bobbing. This behavior serves as a warning, and is often accompanied with circling, biting and fighting poses.

It is indicative that a dragon is willing to battle for its territory. It is not uncommon in these circumstances for bearded dragon head bobbing to turn into fights that often go on until both are injured or one has been killed.

A more violent bob, which is normally much faster and more threatening, is the type you’ll see when the gesture is for territorial reasons. The bob will go hand in hand with the blackened beard, as well.

If you notice that the head bobbing is shorter or is just a few nods, you can assume it is more of an acknowledgement than a sign of courtship or dominance. Slower, smaller nods are often associated with submissiveness.