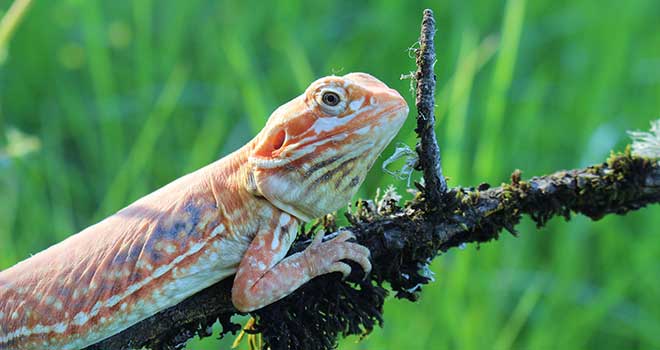 Prevention is always better than being cured. If you own a bearded dragon, it is your responsibility to protect and prevent them from diseases, such as impactions, parasitic infections, MBD, dehydration, and calcium deficiency, etc.

In this post, we going to be talking about nine common health issues you have to watch for when caring for a bearded dragon.

Stress is very common when it comes to dragons whether it has to do with first-time relocation or just a small change in the enclosure. If you make a change in the tank whether it’s just taking a rock out, changing where the basking spots are, or switching to a new cage, bearded dragons tend to lose their appetite when this happens simply because it stresses them out.

Dark markings can appear on its belly and chin when a bearded dragon is stressed out as you can see in the picture below. Those marks are a very common sign of stress but they can also appear for other reasons unrelated to stress.

Also, try feeding them by hand giving them treats because that usually helps them become comfortable again and you end up bonding this way too.

Impaction is caused by prey that is too large for them to chew it properly and it ends up not being able to digest through their digestive system quite so easily. It can also be caused by eating substrate whether it is paper or loose substrates such as sand bark and stuff like that because they can accidentally eat this and it will slowly build up in their digestive system over time.

Cure for food impaction is relatively easy. If it is food impaction these are more easily passed because you can do this easily through massages on the stomach and then giving them warm baths.

Unfortunately, if it is a debris impaction then this has to be secured by a vet with them flushing it out. If it’s really bad then they will have to give your bearded dragon surgery.

If you are looking for more information on impaction you read our post that specifically talks about bearded dragon impaction.

Dehydration is very common in juveniles because they’re a lot smaller and they tend to like the warmer temperatures so they tend to dehydrate quicker.

You should be giving them baths twice a week and if they’re really dehydrated give them one every single day.

You can also use a dropper and drop them on the nose, they tend to really love the water that way.

For severely dehydrated dragons giving them Pedialyte or another type of electrolyte will help them replenish their fluids and give them those essential electrolytes.

This is caused by improper UV light, insufficient supplementation, and improper care and diet. Not getting sufficient UVB light is the single most common reason for calcium deficiency in bearded dragons.

If you want to know more about lighting please read our post on bearded dragon lighting and temperature.

Bearded dragons need a proper UVB light a heating lamp and proper supplementation to live a healthy life. If a bearded dragon is not getting enough UV light then it’s likely to develop a disease called MBD (Metabolic Bone Disease).

Make sure you change the UVB light and heating light every six months to a year depending on what brand you have.

Make sure to dust food with d3 supplements regularly.

Parasites are really common in bearded dragons, especially those that are with new-time owners because they are not sure about the care.

The two most common worms that a bearded dragon can get are pinworms and coccidia worms. These are caused by unsanitary feeders, enclosures, and foods in general. These worms tend to overcome the digestive system and make the stool really loose and smelly.

If the stool has a foul smell that you’re not used to smelling from your dragon and the poo is loose I would go and get a fecal sample right away.

Worms tend to also cause them to be super lethargic and have a loss of appetite so these are other things you need to watch for.

To prevent parasites from infecting your beardie, make sure you’re bathing them and cleaning their substrates and their tank accessories with disinfectant spray.

If you want to read more about parasites, please go to our page that explains bearded dragon parasites in detail.

Metabolic bone disease in bearded dragons is caused by calcium deficiency, improper diet, or improper care in general like lighting and environment.

What Happened if the MBD gets really bad….

If the MBD gets bad enough bearded dragons can lose the ability to move completely and they tend to look really deformed as you can see in the picture below.

They’ll have really curvy tails, arms that sometimes come in, sometimes their jaws will be rubbery and easily movable.

Sadly there isn’t a cure for MBD once it gets bad enough but there are ways that you can improve their situation. Such as by giving them proper lighting, proper diet, and proper care in general for example shed control, cleaning their tank when they need it, making sure that there aren’t any feces in their tank, and stuff like that.

Also, make sure that you are giving them proper supplements. Sometimes having liquid calcium is better than just the powdered form so I would look into all of those.

Mites are external parasites that look like tiny little black dots that hide under and in between your dragon’s scales and live off of their blood. They can also be red, orange, or tan in color depending on the type of mite and when they have last fed on the dragon.

You really need to make sure that you remove them and get rid of them quickly if your dragon does end up having mites.

Female mites can lay up to 90 babies at a time and will do so in the cracks and crevices of the enclosure, or on the dragon so remember to clean that.

The way that you can cure bearded dragon mites is by making sure that their surroundings are clean.

Make sure to get rid of any wood or fabric you have in the enclosure.

Use disinfectant spray and mite spray on your dragon that you can buy from any pet store that sells bearded dragons. Also, be sure that you give them frequent baths as well.

If you have two or more dragons then make sure that you are not doing any cross-contamination by holding the dragon that is infected with mites and holding the other one without washing your hands and disinfecting them.

The yellow fungus is a very aggressive and contagious fungus to reptiles. This fungus is transmitted through mold spores and often begins inside and works its way to the outer tissue. So once you see it externally on their scale, it means that the internal damage is already done.

This fungal infection can be caused by unsanitary conditions and having way too many lizards in one tank where one ends up getting infected and the infection then passes on to the others.

It can also be caused by a bite from an infected dragon and antibiotics from previous medication. The antibiotics kill all of the good bacteria in the digestive tract allowing the fungus to grow in turn causing infection.

Unfortunately, there is no cure for this disease however there are several treatments and medicines that you can give to your dragon that will help them live longer and not deteriorated quite as quickly.

Sadly after being diagnosed with yellow fungus, bearded dragons usually only live for about 18 months after that diagnosis.

Speak with a qualified vet for the best treatment.

Try your best to keep your dragons clean.

Also, make sure your dragons’ substrate is clean and free from any harmful bacteria (This is very important).

URI in bearded dragons can either be a bacterial infection in the lungs or it can be a viral infection from maybe another dragon or something else.

This is caused by being too wet or too cold this is why it is best to make sure you have the right temperatures and they are not wet for long periods of time for any reason.

URI is also passed by high humidity. Remember that you only want to have the humidity at a max of 30%, get this close to 20% if you can.

Symptoms to look for……

Symptoms to watch out for are mucus around the nose or mouth. If you’re seeing any mucus that is a sign that they are not okay.

If they are sneezing or coughing, making any wheezing or popping sounds when they’re breathing continuously.

If they are pupping their beard up and down constantly is a sign that they’re not okay. If their beard is black for more than six hours and if they are lethargic or have a loss of appetite those are all signs that they may have a URI.

URI in bearded dragons can be cured by medicine, fluids, warm baths every four hours to try to break up that heavy mucus.

Make sure you use probiotics with antibiotics to make sure you don’t get something like yellow fungus which we talked about before.

Also put your dragon in an incline position (just like in the picture below) so all of that mucus can drain out of them and get out of them because a dragon doesn’t really know how to blow their nose so this will help them if you do that.

Mouth rot is a bacterial infection of the gums and jawbones. It makes the inside of the mouth to become red and slightly puff. After some time the mouth will become yellow on the inside and around. This can result in puss leakage from the mouth and nose and also dead tissue inside the mouth.

Mouth rot is common in all reptiles. If left untreated it can cause some serious health issues in bearded dragons such as intestinal tract infection, respiratory infection, and loss of teeth.

Fortunately, the early signs of mouth rot are easy to see and cured.

Make sure your beardie is not under any stress. Try not to change their environment dramatically.

Make sure the enclosure is free from anything that they can chew on and hurt their mouth in the process.

Tail rot in bearded dragons is caused by an internal infection. It is a serious condition in which the tail begins to actually rot away. If left untreated the tail will fall off completely and can even spread the infection to other parts of the body too.

Tail rot can also be caused by any trauma or injury or if your beardie hasn’t shed completely.

You can identify a tail rot fairly easily. The tip of the tail may become black signifying a dead tissue due to the restricted blood circulation.

Bathe your dragon regularly when shedding. It helps them in shedding their skins.

Try to prevent tail injury. If infected use hydrogen peroxide on infected areas.