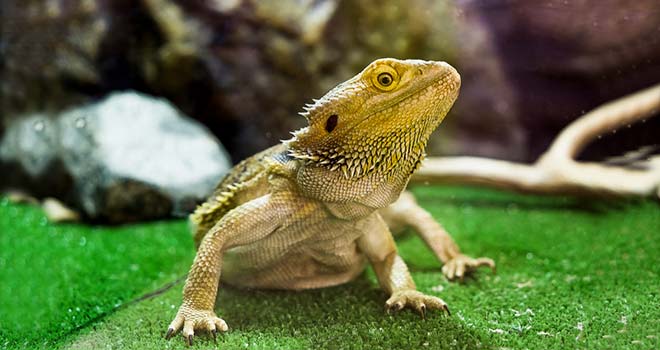 In the wild, there are nine different bearded dragon species. Only four of the nine species are kept as pets, with the Pogona vitticeps being the most popular.

Although all Bearded Dragons are native to Australia, they differ in appearance.

Tan, yellow, olive green and red are the most common colors.

Herpetologists crossbreed bearded dragon morphs to create unique patterns and colors. There are now over 20 morphs for you to choose from.

There are nine different bearded dragons that all belong to the Pogona family (i.e. genus).

All nine differ in terms of size, color, and behavior.

Because each species originates from a particular environment, it has its own set of behaviors. For example, Pogona barbata is the only species found in eastern Australia, and because of the thickly forested environments, they are significantly better climbers.

The most common pet species is the Pogona vitticeps.

Because of its docile and tranquil demeanor, Pogona vitticeps beats every other bearded dragon type as pets.

All bearded dragons are originally from Australia, but they come from different sections of the country. Their preferred habitat depends on where they live on the island.

In the wild, colors of bearded dragons were primarily dependent upon their habitat. However, thanks to selective breeding, bearded dragons are now available in just about every color.

Different breeders describe different colored bearded dragons with different names. What one breeder calls citrus another calls yellow or lemon. The names to describe bearded dragon’s colors varies widely, and we think they are not that important, realistically anyone can see, white, red, orange, etc.

Certain saturated colors such as red, white, and orange are more expensive in the breading market. And by saturated we mean that the bearded dragon is covered in the only color.

One other important thing to understand here is that color and morph are two different things. Most people think of these two as the same however they are different. The color is color, but morph is related to the bearded dragon overall appearance, body type, and scales.

The following are the most common bearded dragon colors.

Below is a list of bearded dragons that have a mostly red appearance:

The following is a list of bearded dragons that have a mix of red with other colors:

In order to produce yellow bearded dragons, breeders combine two bearded dragons with a high amount of yellow. The baby dragons that are produced in the process have a much more yellow appearance. The yellow color becomes deeper if they are bred for more generations. Gold bearded dragons are bred by breeding a red dragon with a yellow dragon.

Below is a list of bearded dragons that are yellow in appearance:

Below is the list of bearded dragons with a mix of yellow and other colors:

White dragons are bred by breeding two dragons with white or pale coloring. As a result, a new generation of bearded dragons is produced that has a lighter color.

Below is the list of bearded dragons that are white or pale:

Purple/blue dragons are bred by breeding two translucent bearded dragons together. These are very rare because mostly these dragons do not retain their color as they grow up.

Below is the list of dragons that are purple and blue in appearance.

Bearded dragons can also be found in standard colors, as a mixture of red, yellow, green, and tan.

Morphs can affect a bearded dragon’s color, but it is mainly related to their body type and maybe in some cases pattern. Each bearded dragon morph has its own unique characteristics and can be found in any pattern or color.

Below are the set of discovered morphs for bearded dragons.

This species has the classic Bearded Dragon pattern. These dragons have no special gene or morph and have their back covered in spikes. Classic bearded dragons closely resemble dragons found in the wild in Australia.

The leatherback bearded dragon is one of the most popular in both owners and breeders. They are bred from heterozygous genes. They do not have any spikes along their backs and have a smooth back and no spikes on their body except for sides and head. As a result, its color appears more vivid.

The translucent trait is more extreme in baby dragons with an almost clear belly that looks blue-ish. However, as the translucent bearded dragons get older, their skins become thicker and the transparent appearance will reduce.

The hypomelanistic morph means less pigment in the skin. Hypo-bearded dragons have reduced melanin resulting in less dark coloring or patterns. Another common trait of hypo bearded dragons is 100% clear nails compared to all other morphs.

Kevin Dunn was the one who first started breeding dunner bearded dragons. These dragons have a unique pattern that runs down through their tail, larger forearm, conical scales, etc.

The German giant is the largest dragon as compared to all other classic dragons. One cannot guess if it’s a German giant until it reaches its full size. These type of dragons are very rare and hard to find.

The silk back or ‘silkie’ bearded dragons are soft as silk with an almost scaleless body. As these dragons have no scales, their color has no interruption and is considered one of the most beautiful of all dragon morphs.

Despite the fact that Silk back bearded dragons are hard to care for, these type of dragons is still very famous among owners.

As the name suggests zero bearded dragons are completely colorless and patternless. These startlingly white color dragons are becoming more and more popular among the owner and breeders.

Witblits Bearded dragons are pattern-less dragons with almost no marking. The Witblits morph is somehow new in the community. Due to their pattern less body, these dragons could be very expensive.

Wero Bearded dragons are bred by breeding witblits and zero dragons together. This white and pattern-less bearded dragon is considered the newest morph in the community.

Different breeders have different opinions when it comes to bearded dragon patterns. Pattern and color can have different names. The most widely used term for the pattern is “tiger’. Just like the name suggests, a tiger pattern means the dragon has dark-colored horizontal stripes on its body just like a tiger has.

Besides the tiger pattern there are many other patterns such as “freckles” and “giraffe spots” however, those are not very popular among the owners as well as the breeding community.

Below is the list of most common bearded dragon patterns

The tiger pattern closely resembles the back of a tiger. These dragons have dark horizontal lines on their back. The deeper and strong those horizontal lines and bars are, the more expensive will be the dragon.

There are a few other patterns such as “S pattern,” unbroken lines pattern” however, these patterns don’t have any standard names for them, except for the Dunner morph. These are the names that breeders use to describe different patterns.

Why Do Bearded Dragons Change Color?

Bearded dragons change their body color for a number of reasons such as to regulate their body temperature or communicate with other lizards. They also change their color to blend in better with their environment and to thermoregulate.

As per the findings published in Proceedings of the Royal Society B, a darker backside keeps a beardie warmer in cold weather.

Can bearded dragons see color? Bearded dragons are not completely color blind but you can say they are near to color blind because they see very little color. They can see red, blue and white better than black, brown and orange. They are OK with lighter colors but hardy see dark colors.

4 thoughts on “Bearded Dragon Colors, Morph and Patterns With Pictures”