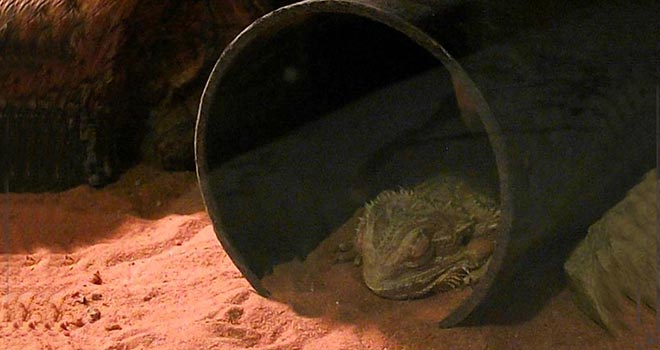 These are some of the questions we ask ourselves. Well, I want to eat some of your minds because there is something completely natural called brumation in bearded dragons.

We’ll talk about brumation in bearded dragons right here in this article.

In a nutshell, brumation is to reptiles as hibernation is to mammals. Brumation is a naturally occurring cycle that a lot of bearded dragons can go through.

During the brumation period, a bearded dragon may not eat, drink, defecate, or move for several weeks. They may also bury themselves underground or go to the darkest and coolest part of their enclosure.

Bearded dragons may brumate at any time throughout the year, but they will mostly brumate during the winter or fall in response to the change in lighting or temperatures.

During the brumation period, a bearded dragon will likely stop eating and drinking water. It may also bury itself underground and not move for several weeks.

Do All bearded dragons Brumate?

From understanding brumation by researching it, it looks like most bearded dragons typically don’t go into this state called brumation when they’re under a year old.

Why Does a Bearded Dragon Brumate?

Brumation is an innate behavior of bearded dragons. Therefore, their body tells them to do it. It is completely natural and 100% safe for your bearded dragon.

In the wild, bearded dragons brumate in order to avoid cold temperatures and lack of water and food.

In captivity, even though their temperature and food supply may stay constant throughout the year, their biological clock may take over and tell their bodies to brumate for a while.

Bearded Dragon Brumation How Long Does It Last

A bearded dragon shouldn’t be disturbed during the brumation period. Waking your beardie during this period can cause the brumation cycle to increase.

For example, waking your bearded dragon every week for food or bathing can extend a 1-month brumation period to up to 3 months.

During the brumation period, the bearded dragon will stop eating and drinking which is perfectly okay and natural.

Your dragon should not lose any weight even without drinking and eating anything during this period.

If your beardie does lose weight, then it probably has parasites. A check-up at the vet prior to brumation wouldn’t be a bad idea to make sure your beardie has no parasites.

If your beardie is just limp and unresponsive, it could simply be brumating. But If it is stiff — as a board, doesn’t move at all — he’s definitely gone.

There are a number of ways to tell if a bearded dragon has passed away or brumating. There’s usually a huge difference between anything living or dead.

If your beardie is dead, it will lose its color and the body will get rigger. For example, if your bearded dragon’s normal color is gray, it will become white when it passes away.

The top of their eyes may also drop down. Also Look for the gaping mouth, sunken eyes, odd coloration, fluid seeping from orifices.

One other way to get a fair indication of whether your bearded dragon is dead or bromating is to turn him/her on his back for a second (no longer). If he’s okay, he will struggle to right himself.

How can you tell if your bearded dragon is going into hibernation slash brumation which is the special reptile name for it?

The first sign of brumation is that bearded dragons will become very lazy. They will stop chasing crickets or any other insects you put in the tank.

They will also stop eating prior to going into brumation. They do so because they want to empty their stomach and the bladder, so they don’t wake up to go to the toilet et cetera during the brumation period.

Other signs of brumation include:

How to Care for Bearded Dragon During Brumation

Don’t offer food to your bearded dragon at least a week prior to brumation. Every dragon’s system is different. The majority of them probably poop twice a week, but it could be different for each dragon.

Make sure it has a big dump before brumation and don’t feed it otherwise. Because if you do feed it and it doesn’t end up pooping that food, it is just going to stay in your bearded dragon stomach, and it’s just going to sit there while it bromates.

Pro Tip: If you don’t want an extended brumation period, do not touch, play, distract or even just go near your bearded dragon when it’s in brumation.

During the brumation, make sure you check up on them every couple of days just in case anything does happen. Consult a vet immediately if your dragon loses a noticeable weight or develops smelly stools during this period as these are often signs of illness or parasites.

Many people don’t like their beardies going into brumation, so they try to prevent it by manually adjusting the cage temperature or lighting. However, we don’t recommend anything that will force or prevent brumation.

Some bearded dragon owners will also turn off the lights and will stop offering food to their beirdies during brumation.

However, we recommend keeping the cage lights on and continue keeping fresh food in the cage in case your dragon wants to eat some and wants to bask a little. But you should not force-feed them, just let them decide.

15 thoughts on “Bearded Dragon Brumation – Signs and How to Care”