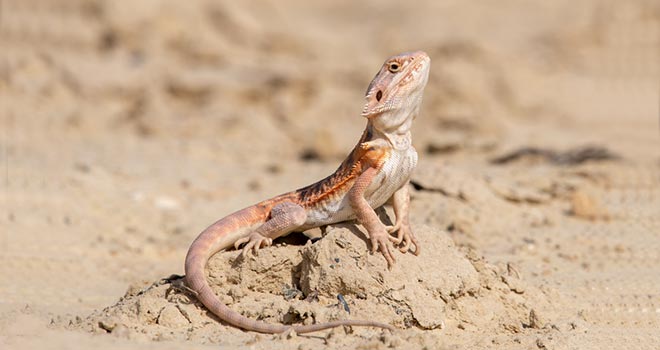 It’s phenomenal that a lizard can display such a variety of characteristics and individual personalities.

The Bearded Dragon has a variety of behaviors it displays, I’ve tried to cover all their body language here briefly. Males & female dragons both display the same behaviors more or less except for some courtship rituals.

If you keep them separated you’ll see the behaviors more frequently when they get to see each other, typically they never mimic each other, it’s always a request/ stimulus and a response.

A lot of the bearded dragon behaviors can have multiple meanings so they’re listed below alphabetically.

In the below video you can see two of my beardies, male & female, mating. It shows a wide range of body languages such as head bobbing, body tilting, tail whipping, circling, and beard colors.

This seems to be a submissive way to communicate, I’ve seen this in both males and females. I’ve seen them spend long times waving and alternating front legs and even from the dragons that are normally very dominant in the below video.

So possibly it could also be a courtship sign as well as acknowledgment.
Check out the below video of 4 of my babies all waving at the same time!

This is the most common signal and can mean a variety of things. If they puff up their beard and there are no signs of a threat nearby, such as yourself, or other dragons then this is most likely that they’re yawning or stretching.

Occasionally if they’ve been a bit greedy in eating they could also be clearing their mouths – I’ve seen beardies do this a few times, flexing their beard after a few insects.

If there is no color change in the beard and they’re not persistently baring their mouth or flattening their body then this is passive.

When threatened by another dragon (or your hand) they’ll puff up their beard and it’ll change to a dark color. They’ll also open their mouths as a sign that they’re ready to bite, normally this will then follow with them flattening their body and moving/jumping sideways.

Sounds obvious, but can happen during mating, the male will mount the female but bite the back of the female’s head to stop her moving. Otherwise, it’s more aggressive.

I’ve had a dragon attack and bite their offspring, breaking their arm – everything was fine, but once they’ve bitten they don’t want to let go, so you’ll have to prise their jaws apart – there’s not too much pressure.

The most obvious cause of biting/nipping occurs in the young when breeders keep a clutch of eggs together in one tank, space runs out and they get aggressive – this is one reason why your beardie will be missing a toe or have a shorter tail – I’ve seen one baby lose a foot to another one biting.

In short, give them their space. This happens with adults too but thankfully most of us are sensible and give each one plenty of space.

Only occurs when with another dragon, same-sex = fight, different-sex = mating. Always they will flatten and angle their bodies towards the other beardie.

The most common area is the beard and when this darkens it’s an aggressive behavior to either challenge another dragon or to scare off a threat.

However, they can also subtlely change their body color too. Lighter shades seem to be more placid/ mellow, darker colors being more stressed. If their color looks dullish then they’re probably getting ready to shed some skin.

Either they have eggs and want to lay them – signaled by frequent digging as well as an increase in appetite and size. Otherwise, this them attempting to make their bed for the night, possibly it can also signal the start of brumation (semi-hibernation). I find in all cases providing 4 inches of substrate or more and some slightly curved pieces or cork bark work in all cases.

This is an aggressive sign when threatened, they’ll flatten their body and tilt it towards their aggressor in order to make themselves look bigger. Normally hopping back or to the side away from you, unless it’s another dragon.

If they’re doing this with another dragon, they’ll most likely start circling each other – this is a sign of courtship, or if it’s same-sex it’ll signal a territory dispute.

If under the UV or heat lamp, they want more heat! Outside of it they’re probably just tired.

This really depends on how much they want to show off, it signals either a territory dispute and dominance (normally with a blackened beard) or courtship both males and females do it – I have a small Lawsons/Rankins female dragon that will run and head bob at the much larger adult male Vitticeps.

The larger males can be so vigorous in their head bobbing that they’re literally jumping off their front legs and you can hear them doing it. The length of time is also a factor, a couple of short head bobs is more an acknowledgment, whereas a full repetition is showing courtship/ dominance.

If the heating is correct and they’re frequently gaping, look for any signs of coughs, sneezes, loss of appetite, yellowing of the mouth tissues – this is likely an infection or respiratory disease.

Otherwise, if the mouth is open wide when your hand is nearby, then they’re excited in anticipation of being fed, but you’ll figure this out as they’ll also be trying to pounce at you with their tongues out.

Failing that if they’ve got their mouth open and they’re showing teeth or you can see the back of their mouth clearly, they’re backing away, the beard is dark and possibly puffed up this is an aggressive response to a threat.

The low head position is submissive, high head positive is assertive. You’ll see them lower their heads when the antagonist is aggressively head bobbing towards them, or if they’re outside and they sense a big bird overhead.

This will occur either as part of circling, most likely during mating, but can also occur when there’s some unwanted aggravation e.g. your hand, an insect.

If you want to see them really use their tails, watch them swim, otherwise most times the tail position reflects alertness & health.